To maintain and promote a community of respect, safety, and freedom

The History Committee, a subcommittee of the UJC, is preparing the most expansive report on the UJC's history ever conducted currently. It will be published upon completion and detail the Committee's entire history from 1955 to today.

Founded in 1819 by Thomas Jefferson, the University of Virginia is an institution committed to the ideals of honor, integrity, and academic excellence. In keeping with this tradition, the student-run judicial system strives to uphold the rights and freedoms of those within the University community. In 1955, an agreement between the Board of Visitors and the Student Council was approved by the student body, which empowered the Judicial Committee to have jurisdiction over violations of University policy. In 1970, the Board of Visitors adopted the original Standards of Conduct which were revised in the spring of 2001, and again in the fall of 2011. The Judiciary Committee promotes the ideals of responsibility in the University community.

In addition to the five Voting Members, the Executive Committee is composed of seven non-voting members: two Senior Counselors, the Senior Investigator, the Senior Educator, the Senior Data Manager, the FYJC Chair, and the FYJC Vice Chair. 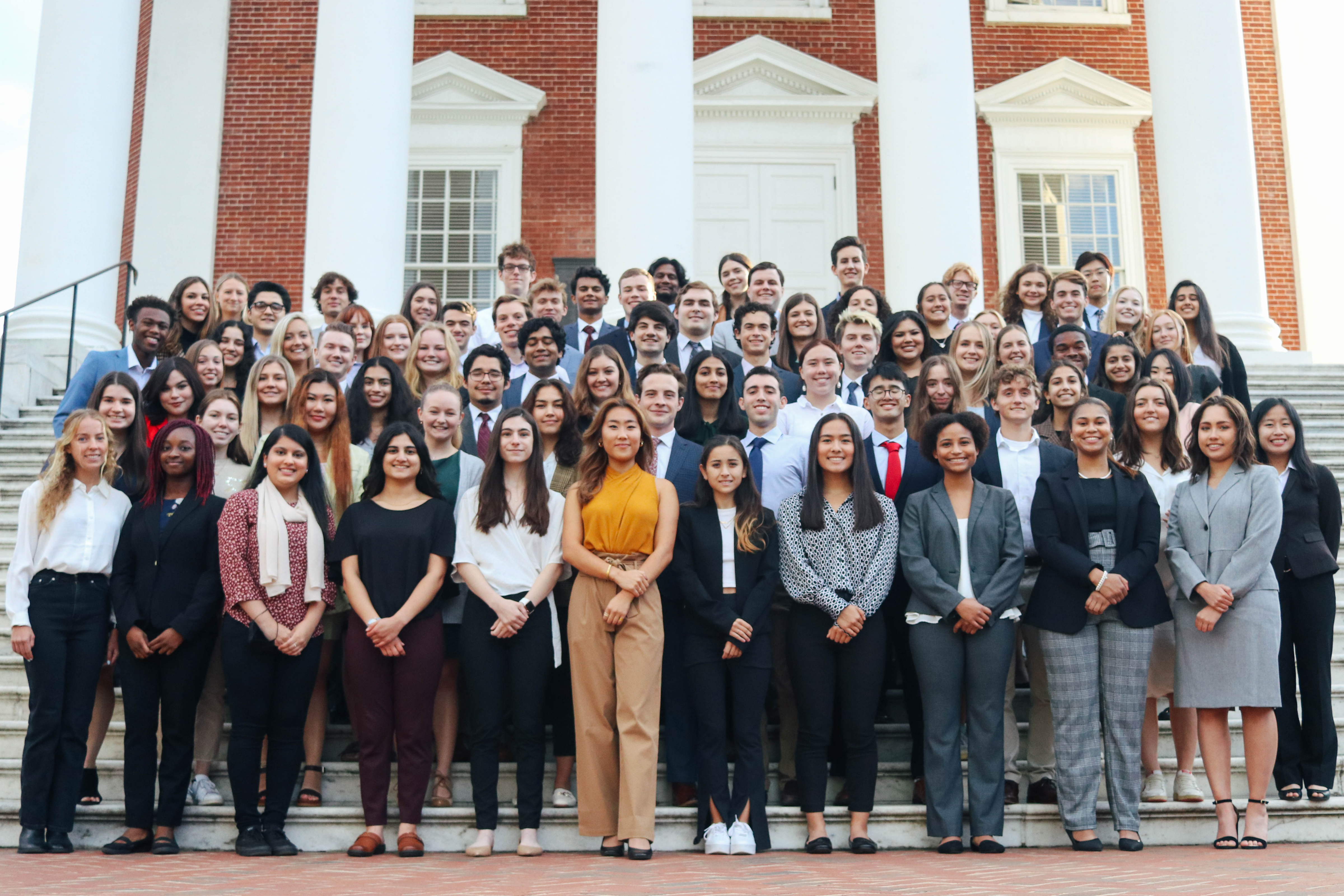 The UJC hears cases of alleged misconduct by a student or a student group brought to its attention by any member of the academic or civic community. Anyone can file a case. The committee has no jurisdiction over cases under consideration by the Department of Student Health or cases involving allegations of sexual assault, violations of University motor vehicle regulations or contractual disputes between students and the University. The UJC does not have jurisdiction over Student Council or the Honor Committee.

It is important to note that the Judiciary Committee and the Honor Committee are separate entities. The Honor Committee deals strictly with cases of lying, cheating, and stealing and has the single sanction of expulsion. The Judiciary Committee hears all cases involving violations of the Standards of Conduct, and can impose any sanction ranging from oral admonition to expulsion. In some cases, Honor Code violations do fall under the Standards of Conduct.

While the Judiciary Committee is student-run, all decisions of the UJC are subject to review by the Vice President and Chief Student Affairs Officer. If they believe that any decision is so inappropriate that it is not in the best interest of the University, they may consult with the Committee for a possible revision or refer it to the Judicial Review Board.

A case is finalized when either the Vice President and Chief Student Affairs Officer approves the decision or when the Judicial Review Board of the Board of Visitors has rendered a decision in cases of appeal.

The University of Virginia is a community of scholars in which the ideals of freedom of inquiry, freedom of thought, freedom of expression, and freedom of the individual are sustained. It is committed to preserving the exercise of the rights and responsibilities in the Constitution. The exercise and preservation of these freedoms and rights require a respect for the rights of all in the community to enjoy them to the same extent. It is clear that in a community of learning, willful disruption of the educational process, destruction of property, and interference with the orderly process of the University or with the rights of other members of the University cannot be tolerated. Students enrolling in the University assume an obligation to conduct themselves in a manner compatible with the University’s function as an educational institution. To fulfill its functions of imparting and gaining knowledge, the University has the responsibility to maintain an atmosphere conducive to its educational purpose. The current Standards of Conduct are available here.

At trial, a panel of five judges hear and decide the case. One of the five judges serves as Trial Chair.

A trial begins with opening remarks from the Trial Chair highlighting the purpose and summary of the proceedings and is followed by opening statements by counsel for the Complainant and Accused. Following this, the Complainant is given the opportunity to present their case of the alleged offense. The Accused then has the opportunity to offer evidence on their own behalf. If the Accused is not present at the trial, the Committee may try them in absentia. Both parties may cross-examine each other’s witnesses, and the Trial Panel may ask questions at any time.

After all evidence has been presented and closing statements have been made by counsel for the Complainant and Accused, the Trial Panel renders its decision. In determining both the question of guilt and, if guilty, the severity of the sanction, there must be agreement of four of the five members of the Trial Panel.

The UJC attempts to correct student violations by assigning sanctions which are rehabilitative and educational in nature.

Sanctions available to the UJC include, but are not limited to:

A student or student group found guilty or sanctioned an inappropriate sanction may request (in writing) an appellate hearing within two weeks after the original decision has been handed down. Motions for appeal will only be granted on the following grounds:

A student who has received an interim suspension from the University may file an appeal directly with the Vice President and Chief Student Affairs Officer. If such appeal is denied, the student may request within seventy-two hours that the UJC hear the case and render a decision on the interim suspension.

This UJC website has existed for over two decades and has changed along with the Committee over the course of history. Archived screen captures of previous versions of the website provide some insight into the ever-changing nature of the UJC.